Vibrant Gujarat reaches out to Poland 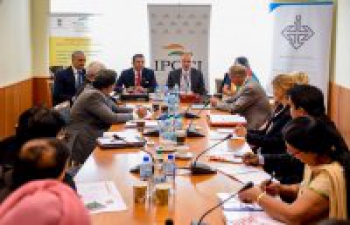 A high level delegation led by Ms. S. Aparna, Principal Secretary to the Chief Minister of the Indian State of Gujarat, visited Poland for a series of meetings and roadshows in connection with the ‘Vibrant Gujarat Summit’ planned in January 2017. In a series of focused interactions, the delegation identified a number of areas for cooperation between Gujarat and Poland, including food processing, mining, ship-building and pharmaceuticals.

2.       In Warsaw the delegation met with Mr. R. Domagalski, Deputy Minister in the Ministry of Economic Development, who also spoke of his numerous visits to Gujarat at the roadshow organized at KIG to introduce Polish business to Gujarat. Ms. Aparna made a multimedia presentation outlining the numerous opportunities offered by Gujarat. Ambassador Ajay Bisaria described Gujarat as one of the most progressive and business-oriented States of India and expressed the hope that a ‘vibrant’ Polish delegation would visit Gujarat in 2017.

3.       Ms. Aparna was leading an eight-member business delegation that included Mr. R.S. Sodhi, Managing Director of AMUL, the largest dairy cooperative in India, and Dr. M.N. Patel, Vice-Chancellor of the Gujarat University. The delegation reached out to four Polish regions, including Mazovia, Transcarpathia, Pomerania and Malopolska.

4.       Poland, as a ‘Partner Country’ of the Vibrant Gujarat summit, is expected to field a high-powered official and business delegation for the event. The visit to India will be coordinated by the Indo-Polish Chamber of Commerce and Industries.

5.       The state of Gujarat contributes more than 7% of India’s GDP and was the foremost among all provinces in the Asia-Pacific region in 2015, attracting more than US$ 12 billion of FDI. In terms of ease of doing business, Gujarat is one of the most attractive locations in India.